Toky Arison is from Madagascar and was a member of the inaugural class of the Starkey Hearing Institute. He shared a bit about the experience for the Senegal mission preparation and execution.

“After graduating from the Starkey Hearing Institute in 2016, I was informed about the plan to develop the program in the French speaking countries of West Africa. This appeared as a great opportunity to scale up our Community-Based Model to a new region and give the gift of hearing to even more people. I did not really expect to be moving to Senegal, but when I was told about what was cooking in Dakar, I knew right then I wanted to be a part of it. Moving to a different country is anything but easy. Not only do you have to deal with all the hassle of being in a place that is so different from what you are used to, but you also have to cope with being away from home, your family and your friends. That being said, the thought of playing a role in bringing back a program that would help change so many lives easily outweighed the rest. I, therefore decided I would take it on as a challenge to go out there and spread the message of caring and sharing through the WFA® Model.

With only a couple of people remaining from the old Senegal program, one of the main challenges was to put together and train a team that would help us serve our patients during the three phases of the Model. I had to work very closely with Professor Malick Diop, our Program Advisor and greatest ally on the ground, who has been very instrumental every step of way. From helping to find the guys who would later form the team, to securing the support of all our partners on the ground, Malick really showed that he cares for the people of Senegal by working tirelessly day in and day out.

The April Phase 2 mission was only a three-day event, but putting the pieces together took several weeks of preparation. Given how great our Phase 1 went, back in November 2017, I knew Phase 2 had to be even greater.

With the help of the volunteers and team, as well as 18 volunteers from Starkey France, we ended up fitting more than 800 patients with hearing aids! The success of the mission shows the tone for what will come next, not only in Senegal but across the Francophone countries in Africa.

So The World May Hear.” 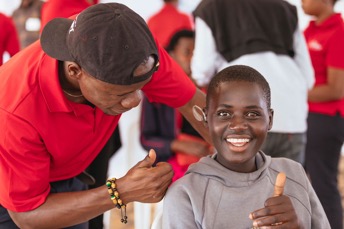 Samuel had an infection when he was just a toddler. Due to his hearing loss, he was unable to find a job. He traveled five hours to Dakar, to be able to receive a hearing aid and a chance at a better future. 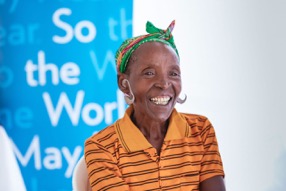 She lost her hearing during the 1994 genocide in Senegal. She couldn’t access any medical attention at that time and has lived in silence for almost 25 years. Thanks to Starkey Hearing Foundation, she termed the gift of hearing as a new birth.